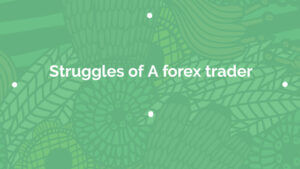 Struggles of A forex trader:

Forex Traders have to deal with different fears and mental pressures. The struggles of a Forex trader are of numerous kinds. Fear of market reversal is regarded as one of those disturbing fears. The traders often exit early because of this fear. The market reversal is a prominent feature of forex market. The temptation to give up a trade too early is a part and parcel of the daily routine of Forex traders. Sometimes a Forex trader becomes afraid of market reversal due to psychological factors. While on the other hand, in some cases the inability to properly interpret the forex indicators becomes the sole cause.

Similarly some traders feel satisfied with a little profit and exit the trade. Such traders do not wait for greater profit. But later they learn that they have actually missed a golden opportunity to earn a heap of profit. Another major struggle is misinterpretation of Forex technical indicators. Forex traders often misinterpret a technical tool and make rash decision of exiting early. They do so to avoid loss. But such an early exit often deprives them of a significant profit.

Making sound trading decisions is the ultimate target and goal of a trader. It is the greatest struggle faced by a Forex trader. Sometimes a little delay in making a decision leads to loss. Similarly if you make an early decision to exit a trade without much thinking then it results in loss as well. Thus making sound trading decisions at the right time ensures gain in trading.

Traits of a Forex Trader For dealing with struggles: