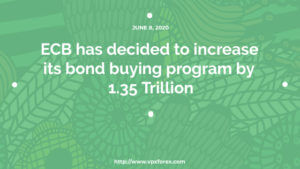 A bold move of ECB:

Finally the global economy felt a slight positive change after the lock down severity of the recent past. The European Central Bank played a vital role in this regard. ECB like always again made a bold move that has caused a huge impact on financial markets. European Central Bank increased the value of its bond-buying program to 1.35 trillion(EURO) and it has decide to expand its bond- buying plan of EUR 750 billion and buy 1.35 trillion EUR and corporate debt till the mid of 2021.

But at the same time ECB has not changed its interest rate and it still remains the same minus 0.5%. Well it is an unexpected yet a bold move. At the same time, the trade and unemployment data of United States of America (U.S.A) also reflects a positive change in its economy as well. No doubt it is a slight relief after a terrible shutdown.

Obviously investors and traders appreciated the decision of the ECB. EUR/USD is one of the mostly traded currency pair. Such a move by ECB has become a turning point for EUR. Now EUR is 0.3% higher against dollar and no doubt it is experiencing the highest value against dollar. Definitely it has made a great impact on equity and bond markets as well. It is a sign of relief and support for traders, economists and investors which ultimately results in the decrease in the debt of Southern European Region. Thus it is a win-win situation for EUR.

The unemployment data of U.S.A reflects that the labor market of U.S.A has suffered a lot and witnessed the worst economic downfall because of the pandemic. The number of unemployed workers in U.S.A was greatest in history as the amount drawn as unemployment benefits by the Americans was 21.5 million last month. However it eased recently as shown in the recent data of unemployment in U.S.A.No doubt it is a relief after a huge crisis of coronavirus. The Economists believe that the economy of U.S.A is expected to witness a decline by 6.6%, however the situation is expected to change in 2021. It is expected that the economy of U.S.A will recover and grow by 5% in 2021.

The trade data of U.S.A also shows recovery in trade. During the last two months, the imports and exports of U.S.A observed the greatest decline.The imports decrease by 13.7% in April as compared to March. While on the other hand the exports witnessed the greatest decline since 1992. The exports observed a decline by 20%.ultimately the trade deficit of U.S.A increased by 16.7%. The coronavirus had crippled the economy during the last couple of months. However the situation is getting better with the passing days and the trade of U.S.A is no exception.

The pandemic has played havoc with the global economy. The impact was so severe that even a strong country like Germany is still struggling. The economy of Germany shrank by about 9% in the first quarter of this year. While on the other hand, the economies of weaker countries like Spain and Italy are faced by the worst scenarios. The economies of Italy and Spain contractedabout 20% in the first quarter of 2020.

The first quarter of 2020 has left lasting impact on the global economy. The effects on these weaker countries were so devastating that it threatened the existence of currency union. Many countries are still trying to cope with the economic collapse.Some countries have taken serious steps for the recovery of economies such as Germany has announced a package of 130 million EUR of tax cuts to deal with the pandemic. No doubt, after the World War II, it is the worst economic situation.

The borrowing cost of Italy, Spain and other Southern European countries has increased a lot in the first quarter of 2020. Obviously the investors and traders felt anxious about the rising borrowing costs.

Eurozone governments are going to issue additional debts of more than 1 trillion EUR in this year to cope with this pandemic. This bold move of ECB is definitely going to play a vital role in managing this additional debt. According to the data of IMF, the debt of Italy is expected to increase by 156% in 2020.While at the same time, the data of International Monetary Fund reveals that the government debt of Germany is expected to increase by 69% this year. All the Central Banks such as the Bank of Japan is buying debts to support in the pandemic.

All the Central banks are trying to cope with the lasting effects of the pandemic in different ways. Several response plans have been devised against pandemic. However, even after all these efforts, the speed of recovery and growth is very slow as the pandemic has totally shattered and crippled the economies worldwide. The efforts are not enough as compared to the devastation of pandemic.  Fortunately, everyone is trying as it is global crisis. Let’s hope for the best in the next half of 2020.

5 thoughts on “ECB decided to increase its bond buying program to 1.35 trillion EURO”